From a historical perspective, the Creeper Trail is a fascinating ride. The trail runs along a rail right-of-way that dates to the industrial expansion across the US in the 1880s and the accompanying iron ore speculation that ran southward down to the western portion of Virginia. A group of speculators organized as the Abingdon Coal and Iron Railroad in hopes of reaping the predicted profits in transporting the speculative iron ore out of the region. Permission was granted by the Commonwealth to build, and then to connect the line to the Norfolk & Western Rail that linked Bristol and Abingdon to Roanoke. African-Americans from a state prison did much of the manual labor on the 16-mile right-of-way between Damascus and Abingdon during these early nascent days, moving the incredible amounts of stone and earth that ultimately resulted in the original rail path from Damascus to Abingdon. Tragically, according to old N&W documents, some of these men died while working and were then buried not far from where they died – along the right-of-way – in unmarked graves. However, shortly after completion of the rail path, and despite the successful mining of small amounts of iron in nearby valleys, it became clear that the much-anticipated iron ore “boom” would not materialize here in the mountains of southwest Virginia, and the company went out of business – with nary a track laid or bridge built. 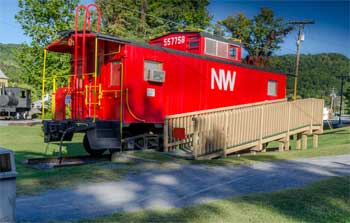 The right-of-way changed hands several times over the ensuing 15 years. That was until a freight agent for Norfolk & Western, Wilton E. Mingea, saw a new potential along the 16-mile hand-carved path and beyond. Mingea knew that much of the virgin timber in the northeast had been depleted while some of the last expanses of highly-desirable virgin timber could still be found in vast tracts just a stone’s throw in the mountains of Grayson and Washington counties. But the prospect of a successful and profitable timber operation lacked for one thing – a means to transport the timber to mills and locations throughout the eastern United States.

Mingea soon purchased the right-of-way in 1898, and commenced building bridges and laying track, and in February 1900, the Virginia-Carolina Railroad was born. Not long after, in 1906, the three brothers Hassinger brought their timber and sawmill operation south from Pennsylvania to southwest Virginia and purchased over 30,000 rugged acres of land beyond and above Damascus, to initiate their new venture. Eventually, the Hassingers and Wilton Mingea combined forces and worked to extend the line up into this arduous and difficult landscape. By 1914, the rail line was carrying passengers along with timber, and Mingea, with the backing of N&W Railroad, continued to expand the Virginia-Carolina Railway over the mountain beyond Whitetop and into Elkland (now Todd), North Carolina – a final length of 76 miles.

His dream realized, and the desire of Norfolk & Western to control all rail traffic in the area very keen, N&W bought Mingea out and by 1919 had acquired the entire line, renaming it Norfolk & Western’s “Abingdon Branch”. By the mid 1920s, it became evident that the long-utilized local logging practices could not sustain such large-scale timber operations indefinitely and after abandoning some branches off the Abingdon Branch, timber transportation soon shifted to (less profitable) passenger carriage aboard the rail’s magnificent steam driven trains.

Not long after the Abingdon Branch began to chiefly carry passengers along with some freight, the line became commonly known as the “Virginia Creeper”. Though there remains some discussion as to the exact origin of the name, most agree that the rail’s circuitous route, marked by steep grades, forced the train to “creep” its way up and down the rugged mountain in much the same way that the indigenous Virginia Creeper vine meanders its way up and down and around sign posts, trees, out buildings, and mountains throughout rural southwest Virginia.

In 1957, the diesel powered engine of the Abingdon Branch replaced the last great steam engine and the final passenger train completed its journey in 1962 – a direct result of the changing transportation dynamics across the US. Over the next 10 years, N&W sought a buyer for the Virginia Creeper, but no prospects appeared. In 1973, N&W testified at hearings before the Interstate Commerce Commission (ICC) that the costs of maintenance and repairs along the line had become prohibitive. In 1974, Norfolk & Western successfully petitioned the ICC to abandon the line effective April 1, 1977. Despite the ardent efforts of local governments, including a $20,000 offer from Washington County, the last train ran on March 31, 1977. Less than a month later, N&W sold the trestles, bridges and track steel to a Chicago contractor for just over $400,000, an agreement contingent upon the removal by April 1978 of all vestiges of the once-vibrant railway. 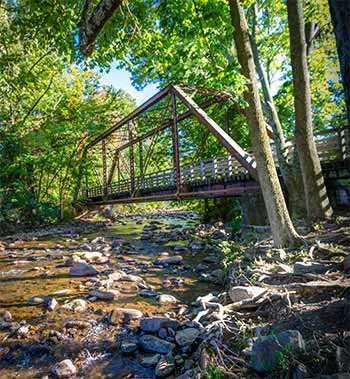 Almost simultaneously, the Washington County Board of Supervisors had begun discussions to find means to keep the railroad running. Dr. Dave Brillhart, a local Planning Commission member, discussed with the Board a recent article about the novel idea of converting abandoned right-of-way corridors to trails. Though the idea seemed far-fetched for this quiet corner of southwest Virginia, several people, most notably Dr. French Moore, Jr., a local dentist and then current vice-mayor of Abingdon, took an enthusiastic interest in the possibility. Timing was nearly catastrophic to the hope of securing the right-of-way as the Chicago Contracting Company had begun the process of removing the steel rails and – crucial to the potential trail – the bridges and trestles. Dr. Moore, along with other supporters, obtained an emergency injunction that prevented the immediate removal of the trestles and bridges.

In a turn of fate – and a clause in North Carolina law – the abandoned NC section of the railroad was required to be returned to the landowners along the right-of-way on the Carolina side. In Virginia, no such requirement existed. Several law suits against N&W, attempting to return the Virginia portion to the adjacent landowners ensued, but were unsuccessful.

Shortly after, Norfolk & Western made it clear that they would not sell to a large number of individual buyers. The US Forest Service (USFS) soon entered the picture and completed the purchase of almost 14 miles of the abandoned Creeper right-of-way between Green Cove and Damascus, much of it running through the Mount Rogers National Recreation Area (MRNRA). Not long after, the USFS purchased an additional 4 miles from Green Cove to Whitetop Station. The town of Damascus soon received federal funds to purchase the three-mile right-of-way from the center of town to the edge of the MRNRA. The “trail” was now 21 miles long.

Back in Abingdon, plans had stalled for the purchase of the Damascus-to-Abingdon section – viewed as a crucial piece of the long range viability of the trail. Some local opposition to the plans, as well as the intricacies in obtaining local, state or federal funding seemed to doom the hopes of many. But the sheer persistence and determination of French Moore and many others began to receive traction. In late summer of 1980, a public meeting, well-attended by supporters, included 12 local residents that offered to put up $3,000 of their personal money towards the purchase of the right-of-way. In the end, the generosity of those residents was not required. The Tennessee Valley Authority (TVA) authorized approximately $95,000 for the right-of-way purchase and the Virginia Commission for Outdoor Recreation designated an additional $60,000 of federal dollars for the project. In 1982, the Washington County towns of Abingdon and Damascus were finally able to purchase the remaining 13 miles between them for $28,000. Abingdon used some of the federal funding to purchase the steel bridges from the Chicago Contracting Company, who also generously donated the wooden trestles they had just recently purchased. A debt of gratitude continues to be owed for the tireless commitment of many…in particular, Dr. French Moore, Jr., Dr. Mel Heiman, the late Dr. David Brillhart, and former US Congressman, Rick Boucher.

However, the successful acquisition of those 13 miles was still a long way from the vision of these early trail supporters. Many of the bridges and trestles were in a complete state of disrepair and wholly unsafe for mass public use. But, with enthusiasm for the completed trail growing, many individuals and groups came forward to help the project along to its culmination. Included in this diverse assortment of organizations who gave of their time and in some cases, materials, or worked for minimal cost to the trail, were members of the Jacobs Creek Job Corps from Bristol, TN; Flatwoods Job Corp out of Coeburn, VA; the US Naval Reserve Constructing Force of Kingsport, TN; the Pittston Coal Company; Bristol Steel including many individual volunteers throughout the region, along with assistance from Hassinger Lumber, Norfolk & Western Railroad and the TVA and several state and federal agencies.

In June 1987, upon an act of Congress the previous year, the Virginia Creeper Trail was dedicated as a National Recreation Trail. In the mid-summer of 1989, repairs and construction from Abingdon to Whitetop Station were finally complete and, following the winding, breathtaking path to the upper reaches of the second highest mountain in the Commonwealth, the Virginia Creeper Trail was opened.

Today, the Creeper Trail is maintained by public-private partnerships between the US Forest Service, the towns of Abingdon and Damascus, and member volunteers of the Virginia Creeper Trail Club, known as “Creeper Keepers”. The success of the trail continues to stand as a testament to the powerful value of partnerships between individuals, organizations, public and private entities.